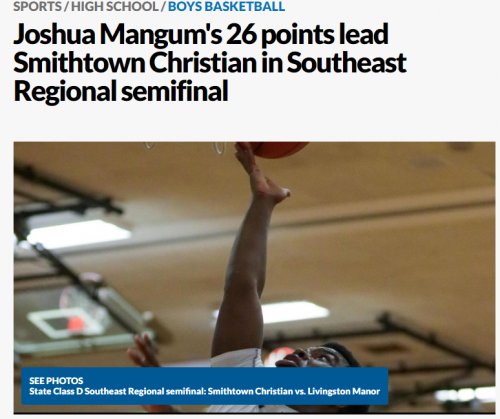 If you look at it objectively, there was little reason to think a Smithtown Christian boys basketball team that won one game last year would be a victory away from traveling to Glens Falls for the state semifinals.

But Smithtown Christian doesn’t have to look at it objectively. Through the lenses of the players and the coaches, there was no reason why this year couldn’t be their season.

“Every year I believe,” guard Joshua Mangum said. “This year, everyone just caught up to their skill level and put in the work in the summer. This year was a testament to all the hard work we did in years prior.”

And Mangum, like he’s been throughout the season, was at the forefront of it all Monday night. The junior guard had 26 points and seven assists to lead Smithtown Christian to a 66-47 victory over Livingston Manor in a state Class D regional matchup at Southampton High School.

Smithtown Christian (10-11) advances to play in the state Class D Southeast Regional final at Center Moriches High School Friday at 7 p.m. With a victory, the Knights advance to the state Class D semifinals in Glens Falls for the first time in program history.

Despite a 1-16 record last season, the Knights trained throughout the offseason with a championship mindset. This year, they have proved worthy of such a status.

“We couldn’t let our past ruin our future,” said senior forward Josh Rivers, who added 15 points, eight rebounds and six steals. “We knew what we were up against this year, we knew we had to change our mindset, change everything about our game. Nothing for our team is easy. We came from rags to riches.”

The Knights utilized a 16-2 run over a span of five minutes to take a 34-17 lead with 1:23 remaining in the second quarter. Livingston Manor (11-8) scored the first six points in the second quarter before the outburst. Gabe Gibson added nine points and five rebounds and DenMark Simon had eight points for Smithtown Christian

“We stayed locked in,” said Mangum, who scored six points during the game-changing spurt. “I understood what we needed to do as a team and I felt like it was my job to spearhead our team to make it to the next round.”

But it’s not just Mangum’s scoring ability that separates himself as a player.

“He’s the quarterback,” coach Dan Skaritka said. “He’s the floor general. He runs the team. If we don’t have him, we don’t have the success we’re having as a team this year.”

And the Knights have had plenty of success, and aren’t ready to stop yet. “They want to be known as the best team the school’s ever had and on paper, they are,” Skaritka said. “We’ve never gone this far. It’s great.