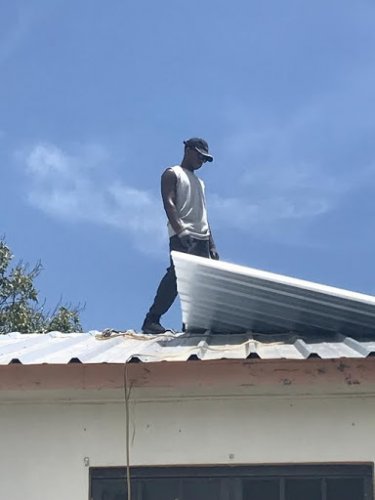 Jonathan E. has been at SCS since 2nd grade and is now a senior. His favorite thing about SCS is the way that the teachers uplift and care about the students. He knows that he can go to any teacher and ask for prayer because he knows that they care.

Jonathan is part of an SCS team called Undignified. Jonathan describes Undignified as “A group of students who raise money and go to less fortunate places to help people and learn how to be servants. They follow Christ’s example of servanthood, to serve and not to be served.”

Last year, the Undignified team went to Puerto Rico. Jonathan said he wasn’t sure about Undignified at first. However, he said when he went on this trip, “God opened my eyes to the privileges that I have in my own life.” He describes one particular instance where God spoke to him on this trip about his future. Jonathan stated, “God speaks to me a lot through other people.” When he was working on building a roof for a family who had not had a house for 2 years, he was filled with the joy of the Lord at being able to serve people. While he was on the roof he was thinking about possibly making roofing and construction a part of his future career. This was confirmed in his heart when he heard Mr. White and Mrs. Bambino say that they could see him getting into construction in the future.

Jonathan said that Undignified has changed his view of the world. He expressed that after seeing what others go through, he knows he is blessed to have two parents and a house to live in, and he doesn’t have to worry. Jonathan said that this taught him to not take things he has for granted. He is challenged to take his education more seriously through these experiences and values the opportunity to go to college. Learning about God is the norm for him and God has always been in his life.

For Jonathan, being at SCS has helped him confront life's challenges through the lens of what he has learned. When asked about what he is most excited about for this upcoming year, he said, “I am most excited about how God can use me to be a blessing to younger kids this year, having the opportunity to pray and encourage the students in the  grades below me.” As  captain of the soccer team, he wants to be a good example for his teammates and to be a true servant leader.